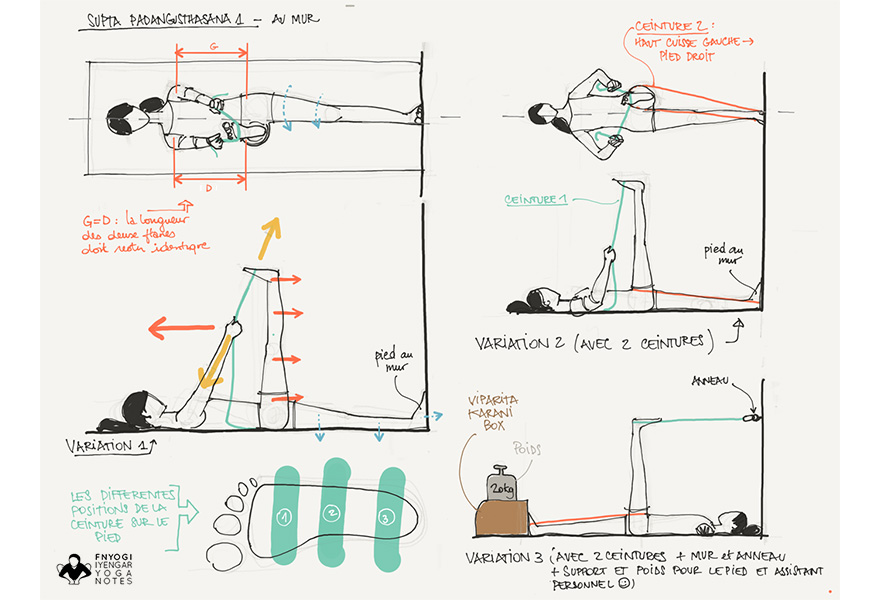 Fanny
No comments yet

“Supta Padangusthasana” is a great classic to start classes. Especially when it comes to preparing the legs for forward bendings and standing poses. This variation in “supta”, that is to say lying on the ground. It prevents the back from going round or on the contrary hollowing two ways to compensate stiff legs at the beginning of a class. Even those suffering from lumbar pain can practice this asana without problem provided they respect the symmetry of the pose.

Here we will focus on the first variation: “Supta Padangusthasana 1″ – in which one leg is stretched frontally. “Supta Padangusthasana” means “elongated posture of the arm extended to the big toe” but the sketch represents a version with belt which is widely practiced since most of us are not able to catch our big toe without bringing a disaster to our alignment.

In Supta Padangusthasana, both legs are taut, the back is straight and stretched, the chest is open and the collar bone wide, the length of the left and right trunk is equal. As there is a great deal to be said about this posture, it is only on the last aspect of this list that I would like to address today: What are the actions to be taken so that the side trunk of the stretched leg – which will tend to shorten – remains long and equal to the one of the side of the ground leg?

Let us see, then.

There are, of course, hundreds of ways to describe actions that lead to this point, and each have its refinement. I will describe here the one I love most, which has the advantage of being pragmatic and easily understandable compared to others more subtle and which require a very developed sensibility (see for example the video of Lois Steinberg, who teaches to move the leg from the ovaries (!

What is great in Iyengar yoga is that everything is perfectly logical. To any action, corresponds one or more “counter-actions”. In Supta Padangusthasana, I have often heard “extending the trunk (of the stretched leg)! But for a long time I did not know how to do it. Let us therefore take our stretched  leg towards the ceiling in Supta Padangusthasana 1. Here the principle is obviously also valid: pulling on the belt towards the ground will not be enough. In order that the side trunk of the stretched leg remains long, the following two actions / counter-actions are implemented:

2 – One pushes the leg towards the wall AND at the same time one subtly brings the hands towards the head (illustration red arrows). This is a key action, since it makes it possible to lengthen the side of the trunk!

Two other variations of Supta Padangusthasana on the wall are also shown on the sketch.

Two other variations of Supta Padangusthasana on the wall are also shown on the sketch.

This second version requires an extra belt that will be fixed between the foot to the wall and the hip of the stretched leg. The latter is fixed before tightening the leg so that the side of the trunk remain of equal length upon stretching  the leg. In this variation, one learns to feel that the two sides of the trunk remain equal, in order to be able to work without filet thereafter.

The third variation shown below comes from my support notes of yoga therapy classes, it is a very passive form of Supta Padangusthasana. In this variation all the alignments are made with little effort and the abdomen remains entirely pacified. You will need both belts placed as in the previous variation, a “viparita karani box” and a weight to simulate a wall for the ground leg, and finally a ring to which one will fix a third belt to fix the stretched leg towards the ceiling. No need to say that it takes quite a lot of props to implement this variation and especially a personal assistant.

For days of great fatigue or laziness!

You can find Fanny also on her own blog Iyengar yoga notes – http://www.iyengaryoganotes.com